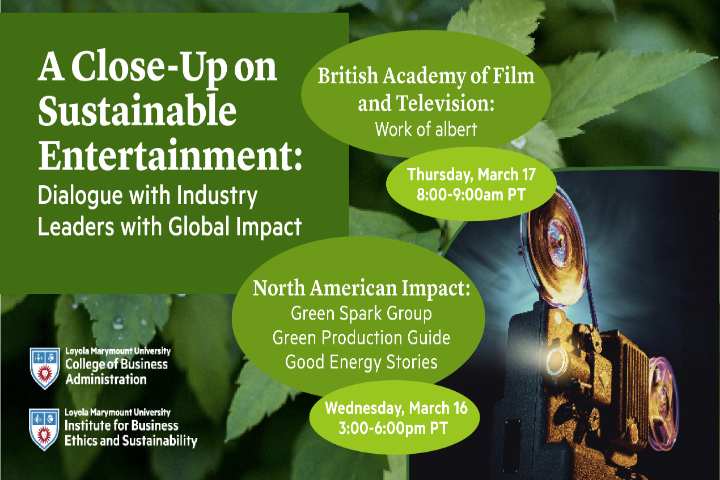 As sustainability becomes an urgent call to action, the entertainment industry has played an important role in not only raising awareness through storytelling but taking proactive steps to advance green production and become more green in its practices.

The Institute for Business Ethics and Sustainability presents a two-day Zoom speaker series, "A Close Up on Sustainable Entertainment: Dialogue with Industry Leaders with Global Impact."

Postponed - Katy Murdoch from the British Academy of Film and Television Arts and albert will discuss certification of green practices in the British film industry.

*This series is part of the course curriculum for Globally Responsible Leadership For Sustainable Transformation, a graduate-level class collaboratively taught by 7 universities across the globe, and designed to accommodate the schedules of international participants.

Zena Harris from Green Spark Group. Green Spark Group is the industry leader in the field of sustainable production by working with creative industry stakeholders around the globe to help shape a greener, more sustainable future for the planet. Their vision is a transformation in culture to change the climate of entertainment.

Anna Jane Joyner from Good Energy Project. The Good Energy Project is a nonprofit creative consultancy that supports screenwriters to weave climate awareness into popular shows and new films. Their Climate Storytelling Playbook will launch in early 2022, empowering writers in Hollywood to write about the climate crisis.

Albert was founded in the United Kingdom in 2011 by the British Academy of Film and Television and is governed by an industry consortium that includes Sky, Netflix, and BBC. Albert's objectives are to uplift the film & television industry to create content that supports a vision for a sustainable future and make positive changes to the environment by actively eliminating waste and carbon emissions from production. UK productions that are required to register their carbon footprint must use albert's Carbon Calculator, and productions that complete a Carbon Action Plan to reduce their carbon footprint receive albert's green certification.

The College of Business Administration organized monthly movies and presentations that highlighted the role that businesses can take as a force for good in the global economy. The movie showings were followed by a group discussion facilitated by special panelists with expertise on the practice areas.